Patrick Curry is living out every college hockey player’s dream. After starting out as a bottom-six role player as a freshman, Curry has risen through the ranks to become one of the Terriers’ most important players on the first forward line. 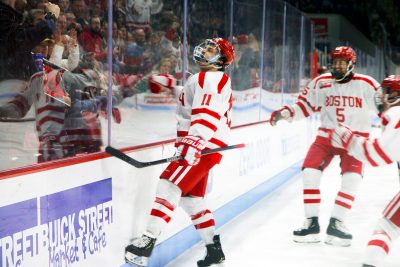 Following what was a challenging 2018-19 season for the team, BU head coach Albie O’Connell and his staff named then-rising senior Curry as the lone captain for the 2019-20 campaign.

“It’s just starting to sink in,” Curry said of the opportunity to wear the ‘C’ on his scarlet and white sweater. “Stepping on campus, I didn’t think this day would really come. It’s really exciting for me, personally.”

Last season, the 23-year-old had his best collegiate season yet, statistically speaking, as he recorded 13 goals and 13 assists in 38 games to go along with a plus-two rating. From fighting to maintain his spot in the lineup to inheriting the captaincy, the winger has improved each year in terms of goals and shooting percentage.

“I know that I’ve grown a lot since freshman year,” the Schaumburg, Illinois native said.

As captain, Curry said he hopes to use this knowledge and experience to integrate the team and help the 2019 recruits settle in.

“[So far it’s been about] just getting to know one other, making sure the freshmen are feeling comfortable with the team and how we go about doing things here BU and really trying to ingrain a solid culture for the coming season,” Curry said.

Curry said he also understands the strong foundation laid before him by previous Terrier captains.

“I learned a lot from Doyle Somerby, Brandon Hickey and Dante Fabbro,” Curry said. “They really helped me figure out what I needed to do to become more of a leader on a day to day basis.”

Continuing, he said, “I think understanding how many great players came before us and have been in these leadership positions, you have the ability to set the tone and really make sure the guys respect you and get ready for the upcoming season.”

The hard-nosed, left-shot forward has shown he can set an example each day for the Terriers both on and off the ice. His work-ethic and leadership qualities have not gone unnoticed, O’Connell said.

“[Curry] has set the tone for the team. I think he will be a really good captain,” O’Connell said. “He’s done a really good job of setting the standard of what we need to do day in, day out.”

Curry usually maintains a calm, quiet demeanor, mostly allowing his work on the ice do the fair share of the talking. That said, O’Connell said he knows when and where to pipe up.

“He’s a really good leader by example, but he can be vocal too,” O’Connell said.

Last season’s trophy-less finish may have been a disappointment by BU hockey standards, but the bar has not been lowered. Curry said he recognizes the high level of performance expected of himself and the team and is prepared to lead the charge.

“[I’m doing] everything in my power to make sure we’re successful this year,” Curry said, “and making sure that guys understand that even if some guys don’t have a letter, they can still be a leader on this team.”