Although desegregation has had mixed results, the Civil Rights Movement as a whole has been “nothing short of revolutionary” to America, according to Boston University political science professor Christine Rossell. 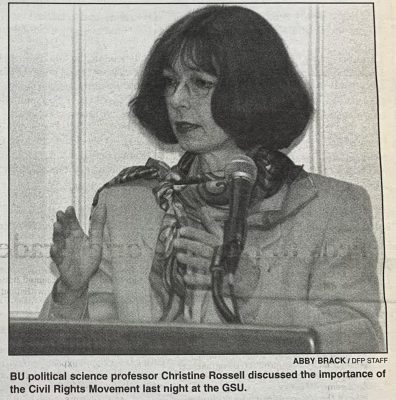 Starting with the Brown v. Board of Education case in 1954, Rossell traced the history of school desegregation and its outcomes last night at the George Sherman Union, the third lecture in a series celebrating the life of Martin Luther King, Jr.

The unanimous support for the principle of integration among Americans is the “greatest achievement” of the Civil Rights Movement, according to Rossell. An overwhelming majority of Americans are in favor of integration. “We just start to fight over details,” Rossell said.

“I was one of those social scientists who thought it could accomplish all those things,” Rossell said. Now, however, Rossell attributes any positive changes to “a larger movement, not desegregation.”

Rossell, who specializes in public policy and education offered a detailed account of the cases leading to the realization that “the dismantling of a legal system of segregation is necessary but insufficient.”

“The Brown decision said essentially, ‘We don’t care about educational outcomes; we know logically that to forcibly segregate the races is to stigmatize the race that is not in power,” Rossell said.

Ten years after the development of neighborhood schools, which separated students based on locale rather than race, integration in the South was still very low, Rossell said. The Supreme Court ruling in the 1968 Green v. New Kent County case that forced integration “marked the point between stopping discrimination and taking affirmative action,” Rossell said.

That year also signaled the beginning of mandatory reassignment plans, or “forced busing.” “[Forced busing] is the tragedy of school desegregation,” Rossell said. The results of the forced attempt at integration were discouraging with over half of the white students not showing up at their assigned school.

“The good news is that neighborhood schools have a fair amount of integration today,” said Rossell. “The bad news is that schools with forced busing are all overwhelmingly minority.”

By way of encouragement and affirmation, the Civil Rights Movement created a generation on black youth with significantly higher self-esteem than their white counterparts, Rossell said. Also, the warning given to blacks that they might be discriminated against leaves them with someone other than themselves to blame if things don’t work out.

Daphnay Joseph, a senior at Regis College and recent Haitian immigrant, disagreed with Rossell, saying higher self-esteem levels were due to personal achievement.

“We’ve seen where we’ve been,” Joseph said. “And seeing where we are gives us a feeling of worth.”

However, Rossell attributed higher black education rates to the effects of the Civil Rights and desegregation movements.

“The black-white education gap has decreased by one-third since 1954,” Rossell said. “And people like Martin Luther King, Jr. can take credit for that.”