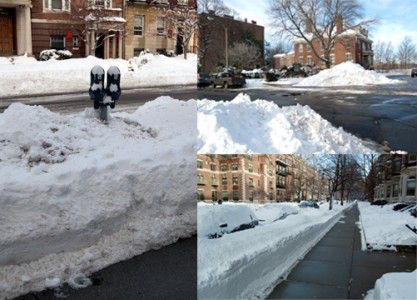 As the winter progresses, the French Toast Alert System on Boston community news website Universal Hub seems to be stuck on “high” – meaning run, don’t walk to the nearest grocery store to stock up, panic-stricken, on all the milk, eggs and bread (and cinnamon) you can carry.

And the call for panic might not be without reason. Since Dec. 1, 2010, 70.1 inches of snow have fallen on Boston, according to the National Weather Service. That’s 5 feet, 10.1 inches, and the NWS reports it’s more than four feet above normal.

“It’s definitely above-average on snowfall this year,” said NWS meteorologist Rebecca Gould. “The record for the most snow in Boston is 107.6 inches, I believe, and that was in the winter of ’95 to ’96.”

So it’s safe to say that we’re having one of the worst winters in recent memory. The question is, why?

Climatologists are quick to warn that there’s never a clear and direct explanation for why anything happens in the weather. Rather, they are able to make predictions and extrapolations based on the typical effects of climatological phenomena around the globe, as well as trends in those phenomena.

Boston University Prof. Bruce Anderson offered two general motivating factors for the miserable weather. One is the weak circulation of air in the polar regions, and the other is an abnormally strong and ongoing La Niña. Meanwhile, we happen to be smack in the middle of a storm track.

Anderson, who is director of undergraduate studies in BU’s geography and environment department, said the mainline of snowstorms to the New England region is just unfortunate chance.

“Storms can get diverted to the north of us or to the south of us,” he said, “and this year there’s not anything in particular that’s doing either.”

Gould said Boston is in a prime position for storms this year.

“Last year…all the storms kind of got suppressed to the south, and this year we don’t have that,” she said. “So all the storms are just coming right up the coast for us.”

So what’s generating these cold, snowy conditions that are creating the storms repeatedly hitting Boston? Anderson pointed first to the weak polar circulation.

“The circulation around the polar regions acts as a fence, and if it’s very strong it contains all the cold air to the north of that,” Anderson said. “If the circulation is weakened, then the cold air can jump the fence…and surge into the lower latitudes and into our region.”

The polar circulation, measured by an index known as the North Atlantic Oscillation or NAO, tends to fluctuate. The NAO is in a negative phase right now, indicating that the circulation is weak.

This change means a lower contrast between the temperature sets, and Lance Bosart, a professor of atmospheric and environmental science at SUNY-Albany, said that contrast can be associated with lower circulation.

It also may sound related to global warming, but Bosart said it’s not necessarily so.

“You can’t take any particular one or two weather events and say they’re linked to global warming,” he said. What you can say, he continued, is that higher temperatures lead to a wetter atmosphere, which means more precipitation – and in the case of colder temperatures, more snow.

“Those modifications produce a surge of cold air from western Canada, which meets warm air coming from the Gulf of Mexico, and that collision, depending on the region, creates heavy snowfall,” he said. “And that region of collision is probably sitting right on top of the eastern seaboard.”

As of Jan. 6, 2011, the National Oceanic and Atmospheric Administration’s El Niño/Southern Oscillation Alert System was in a La Niña Advisory.

According to a January report, the latest issued by NOAA’s Climate Prediction Center, La Niña is showing no signs of stopping, though it may slow.

“La Niña is currently near its peak and is expected to persist into the Northern Hemisphere spring 2011 at a lesser intensity,” the report stated.

The final problem this winter has been that once the snow is on the ground, it stays there. While this is not unusual for Boston, the high snowfall is, meaning the snow is a much larger presence throughout the winter.

“It has not been above 40 degrees [Fahrenheit] in Boston since January 2nd,” said Gould, the NWS meteorologist. “And even though we’ve had days 38, 39, 37 [degrees Fahrenheit], they’ve been few and far between, and that’s generally not enough to melt the snow even though it’s above freezing.”

Gould said what made the record-setting winter of ’95-’96 tolerable was periods of warming between snowfalls.

“I would suspect that that was key – we didn’t have four-foot deep piles of snow that year,” she said. “It’s not a never-ending a cycle, but the more snow that’s on the ground the harder it is to warm up.”

And this means the snow doesn’t melt.

Anderson emphasized that no one storm can be attributed to any one factor. Rather, he said it’s the “preponderance of storms” that can be attributed in general to the oscillation in polar circulation and to La Niña.

“La Niña and bad winters are not one to one,” he said.

But the strength of the current phenomenon, combined with the effects of the negative NAO on the polar circulation, can modify regional climates and the paths of storm systems, just as any “climate change” can, he said.

“The analogy is that it’s loading the dice and making it more likely that you’ll have certain situations,” he said. “If you have a pair of loaded dice, you can still roll a certain set of numbers, any combination can come up.