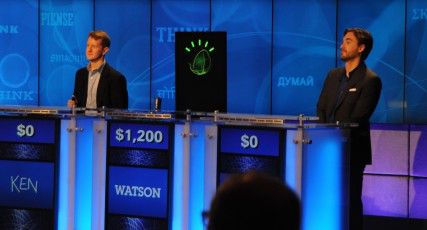 It’s no “Rocky IV” trailer, but IBM’s “Countdown to ‘Jeopardy!’” promotional video strikes an inspirational chord. It’s the archetypal man versus machine narrative – the only difference here is that the role of protagonist is up for debate.

In recent months, you may have seen IBM’s commercial for its artificial intelligence program known as “Watson.” The commercial begins with footage of Groucho Marx’s famous two-liner: “One morning I shot an elephant in my pajamas. How he got in my pajamas, I don’t know.”

Human beings, accustomed to the nuances of language, can plainly understand that there is no literal elephant in Groucho’s pajamas. This is why we laugh. But how could a computer ever know this?

In their development of Watson, IBM may have found the answer.

CLASH OF THE TITANS

The Watson supercomputer, named after IBM’s founder Thomas J. Watson, is the culmination of four years of research by a group of computer scientists led by David Ferrucci. Until recently, however, Watson was kept relatively under wraps from the public — a feat hard to accomplish with an artificial intelligence program equivalent to that of 2,800 computers with 15 terabytes of memory that comprise a total of 90 servers, all which fill entire hallways at IBM’s T.J. Watson Center in Hawthorne, N.Y.

But three years ago, IBM proposed a challenge to the producers of “Jeopardy!”: put Watson on the show and see if it can’t beat human beings. The two human beings selected just happen to be the two winningest contestants in “Jeopardy!” history: Ken Jennings, winner of 74 consecutive episodes in 2004, and Brad Rutter, winner of nearly 3.5 million dollars since 2000.

Watson began a three-night stint on the show last night with a strong showing. By the first commercial break, Watson was up $4,200 on runner-up Rutter. He finished tied with Rutter for first.

Yet certain moments in Monday’s show also exposed some telling problems with the seemingly unbeatable machine. For example, one prompt was: The decade in which the first modern crosswords were published and Oreo cookies were first produced?

Part of the problem of Watson’s genius stems from the fact that its functionality is the same as that of Google – almost. Watson uses its knowledge with speed and precision, but without the infinite resources of the Internet at its disposal. It relies entirely on algorithms — so many, in fact, that they comprise what is known as a “game tree” in the computer science community: an immense series of branches defined by theme and concept, all which lead to different possibilities, but stem from just one question.

“In certain ways, the problem of locating one answer becomes easier because Watson has the ability to check things in parallel,” she said.

In other words, once one algorithm finds an answer, Watson can compare it to an answer found by another algorithm, and so on.

“Watson can use many computers to solve the same problem via patterns, rather than mere facts,” she said. “It is not about uploading entire encyclopedias and dictionaries of data to amass the most information as possible.”

To find the right answer, Watson must hypothesize based on the game show’s exact choice of words. Its challenge lies in understanding human language’s inherent contradiction.

Last night’s “Jeopardy!” ended with Rutter and Watson tied for first place at $5,000. The Watson avatar, a blinking rendering of IBM’s “Smarter Planet” logo situated behind the “Jeopardy!” lectern, was a palpable red, signifying its robotic chagrin.

So what exactly does Watson’s prospective success on the show mean for the scientific community and the human race? If you think the premise hearkens to a certain Arnold Schwarzenegger franchise begun in the ‘80s, you might be mistaken.

“Watson’s appearance on ‘Jeopardy!’ means a lot to IBM and to the public,” IBM spokesman Michael Loughran said in a telephone interview. “Its publicity can only stimulate positive interest in the artificial intelligence field, considering the strides Dr. Ferrucci’s team has made so far.”

Eduard Hovy of the University of Southern California also expressed some optimism.

“We’re 100 or 200 years away from building a machine that can speak to us with understanding and not just patterns,” he said in an email. “But Watson is the imminent first step.”

Over the next two days, Watson will continue to be put to the test against two of the most comprehensive brains in game show history in Jennings and Rutter. But no matter the outcome, we can be sure that Watson’s sheer ability to compete will be marked as a milestone in the field of artificial intelligence.