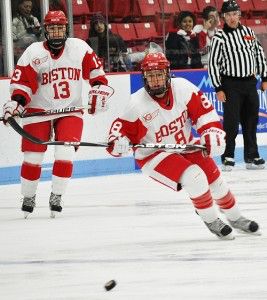 After a five-game run in which the team went 4-1 against its Hockey East opponents, the No. 5 Boston University women’s hockey team closed out the weekend with two matches against the University of Connecticut and Providence College, coming away from both contests with wins.

“[UConn] may not be as sure-footed as they have been in years past, but they compete and I think the goalie is outstanding,” said BU coach Brian Durocher. “It was definitely on my pre-game notes so it wasn’t a surprise to my team that she’s a heck of a goalie.”

While UConn’s netminder Alexandra Garcia made 50 saves against the Terriers, she was unable to completely stop a strong BU offense. Totaling a whopping 54 shots, which they have not done since their 4-2 loss against the University of New Hampshire last season, the Terriers held off until the third period before converting any of their shots into goals.

After taking a 1-0 lead in the second period on a goal from UConn freshman Emily Snodgrass, the Huskies began the third period primed to continue their momentum. However, the tide of play was changed when captain Sami Evelyn was given a five-minute major and game misconduct for hitting from behind.

Senior defenseman Tara Watchorn scored her first goal of the season on the resulting power play, tying the game 1-1.

Before the Terriers could continue their streak, UConn stopped them when Snodgrass scored an unassisted short-handed goal at the 8:07 mark.

The Huskies’ lead did not last long, however, as the Terriers tied the game on a power play less than a minute later when junior forward Isabel Menard scored the first of her two goals in the game on a pass from freshman forward Kayla Tutino.

The dominant duo of Tutino and senior captain Jenn Wakefield brought the team closer to victory on Tutino’s short-handed goal after Wakefield’s shot was blocked and rebounded in the perfect position for Tutino.

“Wake picked off the puck and she did a real good job of carrying it to the net,” Tutino said. “She took a good shot and the puck was just there and the goalie was down. Things just happened I guess.”

The Huskies did not score again, and at the 19:35 mark in the third period, Menard scored an open net goal for her second tally of the game to account for the final score.

Sophomore goalkeeper Braly Hiller earned her second start of the season in the match and made 24 saves against the Huskies.

“Braly was solid, but I’m sure she would like to get the first [goal] back,” Durocher said. “When it was still 3-2 and it was a scramble, she stayed strong in there.”

Sophomore defenseman Anya Battaglino, who played in her third game of the season, also got the start as a treat on her birthday.

“She works as hard as anybody and is not rewarded with as much ice time as she would like, but she’s a part of the team and I’m a big believer in karma,” Durocher said. “If you were standing there when I said she would start you would have thought we won the Stanley Cup.”

On Sunday, the Terriers traveled to Providence, where they captured their second win of the weekend with a 3-2 victory over the Friars (6-6-3, 5-3-1 Hockey East).

Tutino scored her second game-winning tally of the season, her ninth goal in total, during the contest. Tutino and Wakefield supplied the team with three goals, snapping the Friars’ five-game winning streak.

Wakefield earned her 10th goal of the season off a slap shot from the middle past Providence goalkeeper Genevieve Lacasse, tying the game 1-1 in the second period.

Tutino and Watchorn earned the assist on the tally.

Wakefield returned the favor later in the period when she assisted Tutino’s first goal of the game with a pass up the boards to redshirt freshman defenseman Caroline Campbell. Campbell shot the puck toward the net near Tutino, who deflected the puck into the right side of the cage.

Tutino’s second goal came in the third period on a power play with just over seven minutes remaining in the game.

“I don’t think anybody questions how hard she works,” Durocher said of Tutino.

He cited her competitiveness, work ethic and willingness to go to the cage as keys to her success on the team.

“It was a big point game,” Durocher said. “We’re glad it’s behind us.”