In a rematch of last year’s Beanpot consolation game, the No. 1/2 Boston University men’s hockey team exacted revenge on Harvard University, earning a trip to the title game via a 3-1 victory. The Terriers will fight for their 30th Beanpot championship against the Boston College next Monday.

Despite the victory, BU coach Jack Parker was not especially pleased with the level of play from either side. 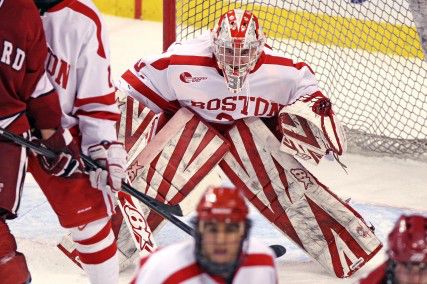 “We were fortunate – we didn’t play our best game tonight, but I think we won because neither did Harvard,” Parker said. “Neither team seemed to be that engaged. There were some pretty good plays made, there were some nice goals scored, but in general, I thought until Harvard really stormed us the last four or five minutes, I don’t know if it’s good for the Beanpot to say it, but it was like sleepwalking.”

Sophomore forward Matt Nieto gave BU an early lead when, at 8:14 in the first period, he tucked a wrap-around bid in between Crimson goaltender Steve Michalek and the right post.

The goal stood as the lone tally in the first period despite nearly four consecutive minutes of power-play time for the Terriers (17-8-1, 13-6-1 Hockey East) due to back-to-back penalties on Harvard junior Marshall Everson. BU struggled to find urgency on those power plays as it failed to connect on passes and was constantly regrouping after Harvard (7-7-9) clears. Crimson freshman Colin Blackwell earned a short-handed breakaway bid after the second Everson penalty, but Millan was there to make the pad save.

“It was a typical breakaway shorthanded,” Millan said. “The guy was coming in with a lot of speed and he made a good move and he probably could have gone all the way down but fortunately I was able to keep with him and make a save. It was definitely a big point in the game to go into the first intermission a goal up.”
In the second period, BU doubled its lead when sophomore forward Sahir Gill made a heads-up maneuver on the power play. Gill picked off a Harvard clearing pass and dished it over to junior defenseman Sean Escobedo, who found Megan camped out on Michalek’s left. Megan slipped the puck through to give BU a 2-0 lead 7:30 into the second.
Megan recorded his second goal of the night and the period14:02 into the frame. The Harvard defense allowed Megan to walk in front of Michalek and Megan lifted it on the backhand over the handcuffed goaltender for the score.
Harvard responded a little more than a minute later. The Crimson were on the power play thanks to a cross-checking penalty against junior forward Ryan Santana. BU’s defense left the entire slot open in front of Millan, and Harvard senior Alex Killorn jumped into the open space and beat Millan to make it a 3-1 game.
After the Harvard goal, the Crimson pulled Michalek in favor of sophomore Raphael Girard.

“It was just, not necessarily any issue that we have with Michalek, just maybe trying to get ourselves a little bit of a different look back there,” said Harvard coach Ted Donato. “Girard plays the puck very well which might allow us to offensively transition a little more quickly. It was just an opportunity to get a goalie in who handles the puck a little bit better.”
After the goalie switch, neither team generated any more offense on the scoreboard. At the end of the second period, Harvard had a golden chance to narrow its deficit to just a goal when it had a 4-on-3 followed by a 5-on-4 after Max Nicastro (matching roughing) and Adam Clendening (interference) took overlapping penalties, but the Terriers successfully killed off both.

BU held the Harvard power play, which entered the game ranked as the best in the nation, to just three shots on four power plays.

In the third period, senior forward Kevin Gilroy almost put one past Girard when his shot rang off the right post and was called a goal on the ice, but a review reversed the call as the puck never crossed the goal line.

Despite heavy pressure from the Crimson offense in the final minutes of the game, BU held on for the 3-1 win, advancing to its 49th title game in 60 total Beanpot tournaments.

“It’s been a long time since we played in a consolation game two years in a row, and we might have been a little nervous about that too,” Parker said. “You can’t win a championship unless you’re playing in that game, so the object is to keep winning and we did that tonight.”