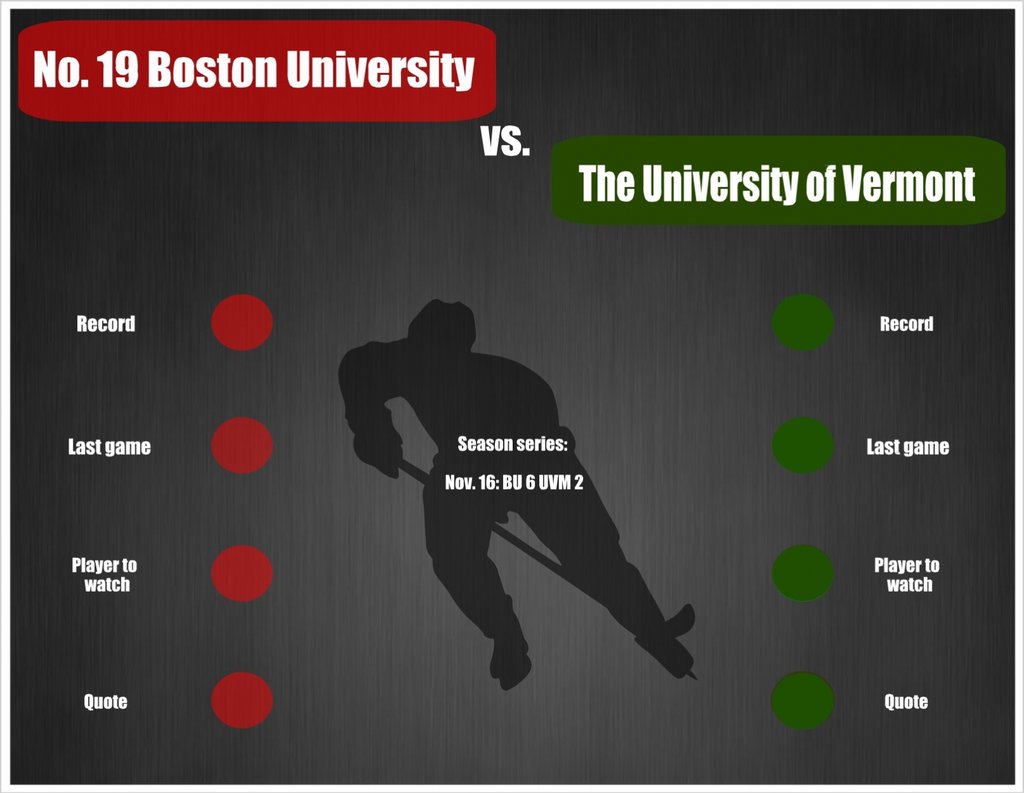 Scoring seemed to come easy last time the No. 19 Boston University men’s hockey team took on the University of Vermont. The Terriers scored the first four goals of the game and left Burlington, Vt., with a 6-2 win on Nov. 16, 2012.

However, a lot has changed since then. The Terriers no longer have Yasin Cissé, Wesley Myron or sophomore defenseman Alexx Privitera on the roster and have struggled throughout much of the second half. Unlike the Terriers, the Catamounts have had a lot more success as of late, winning three of their last five.

So when BU takes on UVM in a critical set of games Friday and Saturday at Agganis Arena, BU coach Jack Parker does not expect another blowout.

Much of the recent success for UVM (10-15-5, 7-11-5 Hockey East) is thanks to freshman goalie Brody Hoffman. Hoffman, who has started all 30 games this season for Vermont, is 3-1-1 in his last five starts with a 1.38 goals-against average and a .942 save percentage. The 6-foot-4 goaltender allowed one goal or fewer in four of his last five games.

On the other end of the ice, the majority of Vermont’s offense comes from its first line of forwards Kyle Reynolds, Jacob Fallon and Chris McCarthy. The three make the top-three goal scorers on the team and amount for exactly one-third of the team’s points.

“All their lines are good, but [the bottom three lines are] more of a physical bumping kind of lines,” said junior defenseman Patrick MacGregor. “All their offense is generated off their first line every night of the week, so we have to worry about them.”

In terms of offense for BU (15-14-2, 12-9-2 Hockey East), the second line of forwards junior Matt Nieto, sophomore Evan Rodrigues and freshman Danny O’Regan has given opposing defenses fits as of late. In BU’s Tuesday night win over No. 17 Merrimack College, Nieto scored twice while Rodrigues added a goal of his own.

Their performance has helped the Terriers stay competitive through the second-half slump, and now it appears they will get more chances to score. Parker said the top three lines are likely to see an increase of ice time as the season concludes.

Parker gave the top three lines more playing time Tuesday night, and it resulted in the team’s most goals in a regulation win since its last game against Vermont. While the Terriers’ third line did not add to the scoring Tuesday night, it performed better with the increased playing time.

“I think the third line is getting more ice time and therefore getting more confidence,” Parker said. “That might make them more reliable, that’s for sure. Confidence is a big factor.”

With only four games remaining in the season, BU is within two points of first place in Hockey East. However, it is also sitting in sixth place, as four teams are tied for the top spot in the conference.

“If we can get home ice, that means we have finished up pretty strong here,” Parker said. “What really matters is who is playing well in that particular stretch.”