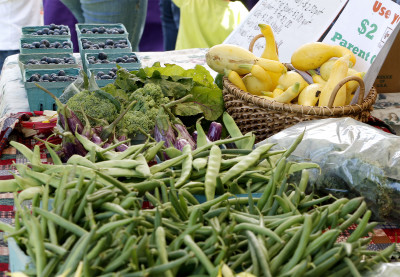 The draft of the Massachusetts Food System Plan, released Friday, identified four general goals that were established by the Massachusetts Food Policy Council in 2013, which are to increase production, sale and consumption of local food, create job opportunities in farming, maximize the environmental benefits from agriculture and reduce hunger.

Winton Pitcoff, project manager from the Metropolitan Area Planning Council, which helped compose the draft, said it is important for people to realize where their food comes from.

“The economics is really the core of it, but there is obviously value in people understanding where their food comes from,” Pitcoff said. “There’s a lot of value in the plan for the need of education and understanding the connections between what they choose to eat and the economy and their health.”

MPAC along with the Massachusetts Department of Agricultural Resources, the Massachusetts Food Policy Council, the Pioneer Valley Planning Commission, Franklin Regional Council of Governments and the Massachusetts Workforce Alliance composed the draft of the plan — the first of its kind since 1974 — to provide solutions to the problems faced by those in the agriculture and fishing industries.

“This is a tremendous opportunity to engage critical stakeholders in a process for identifying the options available to us that best ensure the long-term sustainability of our food system in the face of mounting economic and environmental challenges,” said Greg Watson, commissioner of the agricultural resources department, in a press release from June 2, 2014.

The draft reports that typically 80 percent of all money spent on food in the United States goes to the marketing and retailing food products while less than 16 percent goes to the farms and fisheries that provide them.

In 2012, total food system sales and revenue accounted for $19.3 billion, or about 4.5 percent, of state gross domestic product, the report stated.

If each Massachusetts household spent $20 more on local food per month, more than 9,000 jobs would be created in the state, according to the Community Involved in Sustaining Agriculture.

Additionally, the project addresses the rising problem of obesity and the difficulty of attaining fresh, nutritious food in urban environments. To counter malnutrition, the draft recommends educating consumers on how to include healthier foods in their diets, expanding the availability of locally-grown foods through food pantries and supporting farm-to-school programs to provide better food for children.

Pitcoff stressed the importance of the plan for everyone in the community.

“What’s most important is that people are recognizing now that there’s a real need for this [plan],” Pitcoff said, “and it came out of a need to figure out how we can strengthen connections between local food and the state and how we can improve on them.”

Several residents expressed satisfaction with the idea of boosting the locally grown food industry in Massachusetts.

Orlando Hall, 40, of Fenway, said he would like to see an increase in local production because of its ability to build community.

“Well for one, locally-grown is healthier,” he said, “and locally-grown allows for building community, because the farmer has a relation with the person who is buying.”

“They’re better for the environment. We’re not shipping them as far and there’s less of a carbon footprint,” he stated. “I also seek [locally-grown foods] out because I want to support local businesses.”