The Complete Streets Funding Program will dedicate $12.5 million in grants to rebuild infrastructure and ensure safer transportation for pedestrians and cyclists, according to a Wednesday press release. 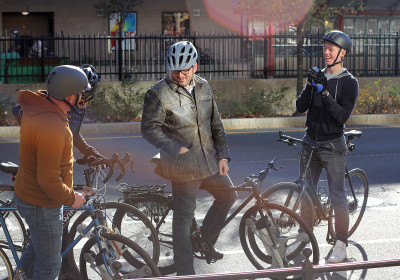 At the department’s Moving Together Conference, Pollack said the program will serve as an investment into more supportive infrastructure that is capable of accommodating various areas in Boston.

“We wanted to design a program that would encourage healthy and sustainable transportation options while also meeting the needs of a broad range of communities,” Pollack said in the release.

In addition, a Separated Bike Lane Planning and Design Guide, which was also released Wednesday, will provide planners and engineers with current evaluations of roadways and potential plans for remodeling.

Pollack emphasized the need for a system that could provide greater protection to Boston bicyclists.

“That’s where separated bicycle facilities come in,” Pollack said. “Separated bike lanes are a key ingredient in the development of safe, comfortable, and connected bicycle networks that will attract bicyclists of all ages and abilities.”

MassDOT Complete Streets Engineer Lou Rabito agreed about the importance of separated bike lanes and said MassDOT is working on several innovative projects in an attempt to increase safety for cyclists.

“One of the exciting things we’re working on, which was also announced at the Moving Together Conference, is our ADA Curb-ramp Assessment Tool,” Rabito said. “We went out and surveyed over 27,000 ramps state-wide and we inventoried those ramps and took measurements to see what kind of service level they provided.”

“We’re going for an innovation grant through the Every Day Counts Initiative,” Rabito said. “It’s a million dollar grant and what our hopes are is, if we’re given this grant, we could now take this program we’re using to inventory our curb ramps and make it public.”

Doug Johnson, community organizer for the Boston Cyclists Union, supports the implementation of better bike facilities and stressed the need to provide cyclists with further protection.

“Right now the biggest barriers to making cycling, as a means of transportation, safer in the greater Boston area is infrastructure that is not safe for different modes of travel, or wasn’t designed with different modes of travel in mind. A lot of our infrastructure is very auto-centric and isn’t even necessarily adequate for drivers,” Johnson said.

“We would absolutely like to see more investment in better road infrastructure,” Johnson said. “There’s definitely a really big need for more funding, so we’re glad that MassDOT is offering some up, but we would like to see even more.”

Several residents said they are in favor of projects aimed to provide safer options for bikers and pedestrians and look forward to improvements.

Samantha Gafford, 30, of Brighton, said there is a lack of safety for bikers, especially during peak times of travel.

“I bike and drive, but sometimes in the morning during rush hour, I feel like it’s not safe at all for bikers. I’ve seen cars just merge over into bike lanes,” she said. “It’s just not set up very well.”

“Obviously, there are a lot of bikers around,” he said. “They can tend to be pretty aggressive, which is understandable since they’re not as safe as cars, so I think separating them more would make it easier for bikers and easier for cars.”

Jaclyn Hodas, 23, of Fenway, shared the sentiment, saying safer roadways will ease the anxiety that bikers feel while riding in Boston.

“I know people who bike to work every day, so it’ll definitely be easier for people like that who actually use biking as a means of transportation,” she said. “It’ll just be safer, because I think the drivers who are super careless here will pay more attention if they see wider lanes. Bikers will just have a better experience.”