“This is a strong sign that Boston University is both a first and top choice for thousands of students,” Executive Director of Admissions Kelly Walter wrote in an email.

The university has sent letters of acceptance to 916 students in December, resulting in a 42 percent acceptance rate for those who applied for the first of two Early Decision rounds.

Another 2,039 prospective students applied for the second round of Early Decision, and they will receive their decisions from BU by mid-February.

By the end of the second round, the university plans to enroll 1,190 students in total, making up about 35 percent of the class of 2021, according to Walter.

“By applying Early Decision, students are sending a very clear message to BU Admissions that, if admitted, they will accept our offer and enroll at BU,” Walter wrote. 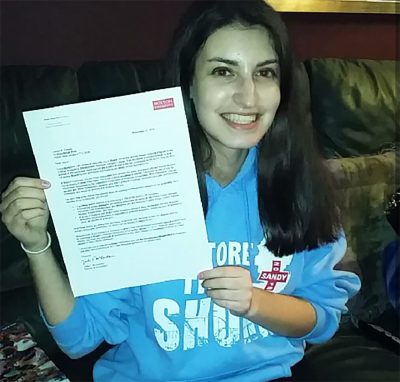 “I look forward to focusing my education on my interests in global public health. I also look forward to [becoming an Emergency Medical Technician] on campus. I knew BU was the school for me after my dad, who graduated from BU in ’84, took me to visit the campus. I saw a student walking to class with his backpack on and textbook in hand, and I could see myself in his shoes. I attended a three-week high school program on campus over the summer and that just sealed the deal for me.” 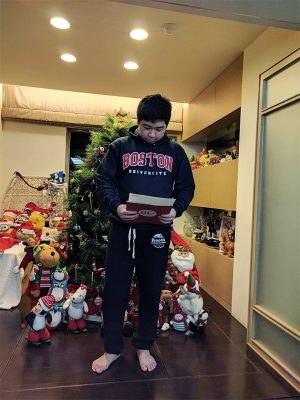 “As a sibling of a Terrier, I have always considered BU as a university I would like to study in. After touring around the school last October, I was confident that BU is the perfect school for me! I really look forward to making new friends, participating in intramural volleyball teams, as well as different student associations and clubs! I am also very excited to continue my research journey as a psychology student through the Undergraduate Research Opportunities Program.” 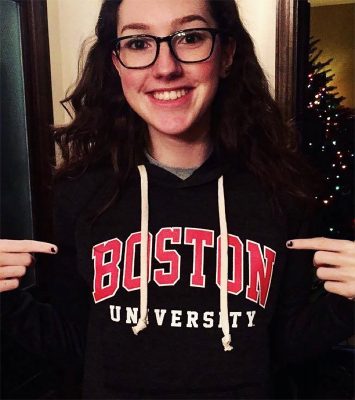 “BU has everything I was looking for. I really became interested after attending an info session during my sophomore year, and when I visited campus a year later it all just fell into place. I knew I wanted a school in an urban setting, and Boston is one of the best cities to go to college in so that was a really attractive feature. Plus, they have a great business school and highly-ranked academics altogether so it was a perfect fit for me. There are so many things I’m excited about! Just being able to study in Boston is definitely something I’m really looking forward to, and I can’t wait to meet all the people at BU. It’s a pretty scary time in transition from high school to college, but BU has so many great aspects that I know it’ll be really fun.” 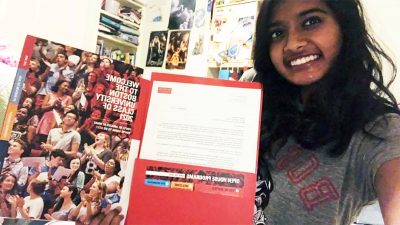 “I found out about BU when I was just researching different websites. One afternoon I spent it just looking at the BU website and I fell in love with the school. One of the things I loved about BU is that it has so many opportunities. A program that really interested me (and I ended up writing my essay on it) was the BU Philhellenes program. I really wanted to study abroad in Greece after my vacation there this summer. After visiting the campus in September, I knew I had found my school. I’m excited to meet the diverse community, and see some of the people I’ve met so far. I’m really excited to move out of my small bubble, and move to the big city.” 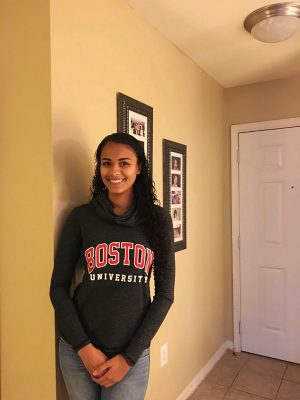 “I visited BU last year during the fall and fell in love with how beautiful it was. Also, coming from a large high school, it brought comfort when I [saw] the large crowds of students walking to class down Commonwealth. I know it sounds corny, but the dining hall is what I’m looking forward to a lot. It was delicious … totally not what I had in mind when I think of college food. I can’t wait to participate in maybe intramural volleyball and see what clubs [BU] has to offer.” 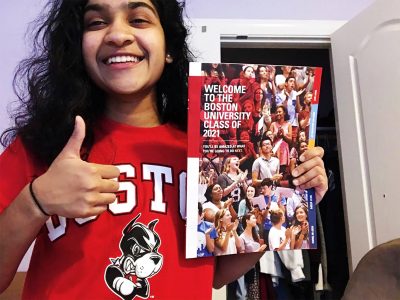 “I loved the intense academic rigor [at BU] and the research studies being conducted at BU, specifically research done by Dr. Andrew Budson on music having a positive effect on Alzheimer’s patients, mixed with the lively city environment on campus! I am looking forward to joining an acapella group, joining the Society for Neuroscience, making memories and lifelong friends and receiving a top-rated education [with many] opportunities from a world-ranked academic institution!” 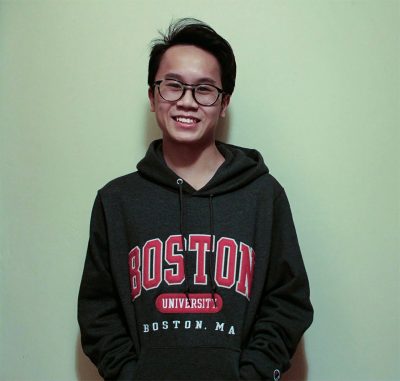 “I knew BU was the school for me when I stepped [into] the George Sherman Union. The pride shown through their students and its enormous and diverse community swayed me. The endless amounts of opportunities to explore your future career is indescribable. If I have to be completely honest, [I’m looking forward to] Lobster Night, but also the amazing food and making lifelong friends. Finally, I guess I have to say the education and going abroad!” 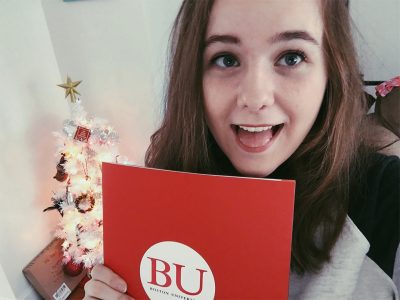 “Since I only live about two hours away from Boston, I’ve frequently visited the city either for school or just for fun. That’s what initially drew me to the location, but BU itself seemed to be exactly what I was looking for in a college. The research opportunities look endless! Attending Boston University just feels like the natural next step in my education. I also believe that I’ll be able to mature into the version of myself I’ve always wanted to be. Being from a small town, I got by on being rather quiet and shy. But by living in a city like Boston, I know I’m looking forward to growing as a person and working towards being more extroverted. Furthering my eclectic interests in the pursuit of knowledge is, of course, another main priority for me that I couldn’t be more excited to explore. There are clubs to join and communities to meet, and I’m ready!”