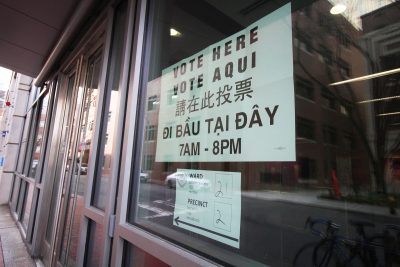 By Allison Pirog and Vanessa Kjeldsen

Massachusetts is gearing up for a primary election unlike any the state has seen before. Voters are choosing their party’s U.S. Congress candidates Tuesday, while the state battles a pandemic and record unemployment rates.

Take a look at who’s on the ballot in Boston:

Incumbent Ed Markey was elected to the U.S. Senate in a June 2013 Special Election and previously served in the U.S. House of Representatives for 37 years.

Along with Rep. Alexandria Ocasio-Cortez, Markey introduced the Green New Deal in 2019.

His opponent Joe Kennedy III, grandson of former senator and attorney general Robert F. Kennedy, is in his fourth term in the House. Like Markey, Kennedy also identifies as a progressive.

In the Seventh Congressional District, incumbent Ayanna Pressley is running unopposed for her second term in the House.

In 2009, she became the first woman of color ever elected to the Boston City Council and, in 2018, she made history as the first Black woman elected to Congress from the Commonwealth.

Pressley is known as a member of “the squad,” a group of four progressive freshman congresswomen including Ocasio-Cortez, Ilhan Omar and Rashida Tlaib.

Goldstein is a primary care doctor at Massachusetts General Hospital, where he helped create the hospital’s Transgender Health Program.

Scientist Shiva Ayyadurai ran as an independent against Sen. Elizabeth Warren in 2018. He controversially claims to be the “inventor of email.”

Attorney Kevin O’Connor is running for office for the first time. He is a proponent of inter-party cooperation — such as that of Republican Massachusetts Gov. Charlie Baker with a largely Democratic State House — as opposed to the partisan division he sees on Capitol Hill today.

How People Will Vote

Massachusetts’s early voting period for the primary began Aug. 22 and wrapped up Friday. Boston voters could vote at several polling locations across the city and did not need to provide a reason or excuse to vote early.

Because of the pandemic, the Massachusetts legislature approved a temporary measure allowing all Massachusetts voters to vote by mail.

The deadline to request a mail-in ballot was Aug. 26. This option will also be available for the general election in November.

Beth Huang, executive director of Massachusetts Voter Table, a non-profit that works to increase voter engagement, said this was an important step in maintaining a fair democracy.

“We believe that no one should have to choose between their health and their right to vote,” Huang said.

“I think the reasons for being active for voting and being active to try to encourage voting this year is quite obvious,” Keyssar said. “The direction of the country seems to be at stake and if one cares about that, then it’s important to vote.”

Mail-in ballots for the primary must arrive at the election office by 8 p.m. on Tuesday.

Those who wish to vote by mail in the general election should send their application by Oct. 20 — but Oct. 28 is the latest applications will be accepted.

Registered voters can also vote in person. Polling locations will be open from 7 a.m. to 8 p.m. However, voters should check their polling location before heading to the polls, as many traditional locations have changed due to the pandemic.

COVID-19 precautions will be in place to keep voters safe. While waiting in line, the Election Department instructs voters to wear a face covering and practice social distancing.

Poll workers will be supplied with masks, face shields, gloves, disinfecting products and hand sanitizer. Workers will be asked COVID-19 screening questions and will not be allowed to work if they’re experiencing symptoms.

Voting machines, clipboards, auto-mark machines and other frequently touched surfaces will also be cleaned “constantly,” according to the Election Department.

Regardless of the means, Huang said it is important to vote. In local elections, it can be easy to swing the vote with increased participation.

“Really every single vote matters,” Huang said. “Your roommates, your friends or other members of clubs that you’re in [can make up] actually the margin of victory in some of these campaigns.”