Seven questions concerning symptoms previously associated with COVID-19 on Boston University’s symptom attestation survey were removed over Labor Day weekend, bringing the total number of questions down from 15 to eight.

New features and graphs were also added to the COVID-19 Testing Data Dashboard.

BU spokesperson Colin Riley said the now-removed questions were general and addressed symptoms that could easily be connected to ailments that are not coronavirus-related.

“They were broad,” Riley said. “Some of them, just the very nature of them, mimic what you have if you have allergies or a cold or flu.”

The process of creating the survey, Riley said, involved searching for consistency in hopes of creating best practices.

Several updates were also made to the COVID-19 Testing Data Dashboard, including the addition of faculty COVID-19 cases and removal of invalid test data. The dashboard also now groups individuals who are no longer contagious into the “recovered” category.

The goal of these changes, Riley said, is to provide transparency to the BU community.

Judy Platt, director of Student Health Services, wrote in an email sent through Riley that a number of factors influenced the University’s decision to remove survey questions, including data from the past six weeks on how responses have been correlating with actual findings.

“We initially started both employee and student questionnaires with a significant number of questions on the daily attestation,” Platt wrote. “Some of these symptoms are more highly associated with COVID-19, so we have removed some questions.”

Platt said future changes to the daily symptom attestations may be made as the community’s “experience changes and knowledge grows.”

Catherine Klapperich, director of COVID-19 testing at BU, wrote in a tweet that if the U.S. Centers for Disease Control and Prevention symptom list changes, the attestation survey questions will change, too.

Members of the community are sorted into different testing categories based on how frequently they visit campus. Klapperich wrote that survey questions differ between faculty and students.

“The two systems are separate, student and [faculty],” Klapperich wrote, “so not surprising if rollout happens on different days.”

Laura Hatfield, associate professor of health care policy at Harvard Medical School, said she believes the surveys are useless if students believe that answering honestly will result in isolation and quarantine. Fear of negative consequences, she said, will lead them to act dishonestly.

“Even if the answers to the survey are 100 percent truthful,” Hatfield said, “I think it has somewhat diminished value because so many people who are asymptomatic still have high enough viral loads to be able to transmit the virus to other people.”

Even so, Hatfield said she agreed with the reduction in questions.

“Early in the course of this pandemic, a very large number of physical symptoms were thought to potentially be associated with [COVID-19],” Hatfield said. “Since then, we have refined this down to a smaller number of symptoms that seem to be more tightly linked.”

Caredwen Foley, a third-year graduate student in BU’s School of Public Health with experience in surveys and analytics, said she understands why BU would remove the symptom inquiries.

“My interpretation of that is that they were getting a lot of affirmative responses to symptoms that were not specifically indicative of exposure or infection,” Foley said. “I wouldn’t be surprised if there are subsequent changes to the list of symptoms or those questions in that survey.”

Foley said she did not understand, however, why BU deleted the contact tracing question from the COVID-19 survey.

“On the surface, to me, it seems very reasonable to try to collect information about that via the symptom attestation survey,” Foley said. “I was surprised to see it removed, but I don’t know what the details are.”

For Foley, the biggest adjustments she would like to see made are to BU’s dashboard. The way information is presented on the topmost chart, she said, makes the data harder to interpret.

The bar chart displays the positive and negative test results for each day in two stacked colors within the same bar. 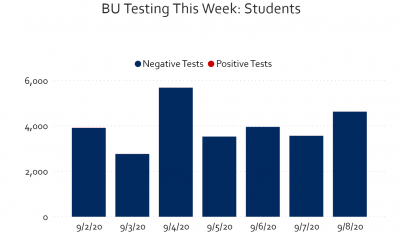 “Given the extremely large number of tests that are being conducted, the positive tests are always meant to show up as a tiny, tiny sliver on that chart,” Foley said. “I think that this information would be a lot easier to interpret … if instead those were shown as line graphs.”

Foley added that the dashboard’s comparisons to local data are “inappropriate.” One problem she sees is that people are being tested at varying frequencies.

“Most people don’t have routine access to testing if they don’t have a reason to think they’ve been infected with COVID-19,” Foley said. “It’s not clear whether the BU tests are included within those Massachusetts and local counties’ averages.”

Hatfield said the information students would actually need — such as who was present in a public space at the same time as them — is too precise, making the dashboard impractical for making daily decisions.

“If I were a student, my main concern would be about the hyper-local environments of people with whom I might have contact,” Hatfield said. “The campus-level information is a signal to the outside world of how BU is doing.”

College of Arts and Sciences senior Jithvan Ariyaratne said he was happy BU reduced the amount of questions the survey prompts, removing the specific questions he believed were likely irrelevant to COVID-19.

“It was a smart move … because the basic check that they were trying to do was pretty broad,” Ariyaratne said. “I’m glad they removed things like diarrhea and stuff like that because you could always have eaten something bad in the dining hall the day before and woken up to diarrhea.”

Ariyaratne added he is optimistic about BU’s response to the pandemic, after seeing increased testing across campus and having received his results consistently on time.

“I’m really happy with it,” Ariyaratne said, “and I feel like BU does indeed have one of the best [COVID-19] responses in the country right now.”