Right outside of Marciano Commons, near the ROTC headquarters, hangs an American flag. Right beneath it, billowing proudly in the breeze, is the Gadsden flag. If you are unfamiliar with it, the flag depicts a snake wrapped in a coil, with the words “Don’t Tread on Me” boldly printed on the bottom.

This flag is racist. It is disgusting to see our administration — not just some random individual living on campus — display the flag so flagrantly.

It bears mentioning that an object’s historical origins cannot contradict any modern interpretations or associations it has gathered. But due to the fact not many people are aware of this flag’s history and modern connotations, it is worth briefly going over.

The rattlesnake has long been a symbol of American identity. One of its earliest iterations comes from Benjamin Franklin, who published an image of a snake cut in eight sections captioned “Join, or Die” in 1754. The snake represented the colonies, and the image is considered the first satirical cartoon in an American newspaper.

The Gadsden flag can be traced back to 1775, when newly enlisted marines marched carrying drums painted with coiled rattlesnakes, 13 rattles and the motto “Don’t Tread on Me.” It was named after South Carolina Continental Army Col. Christopher Gadsden, who was on the Marine Committee.

Having gone over its history, some may ask how anyone could claim this flag is racist if its origins are so firmly rooted in the American Revolution. How can an early symbol of American identity be considered racist? 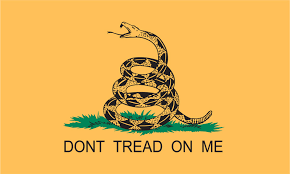 Any knowledge of American history and identity can tell you it was not formed under principles of racial equity. But as previously mentioned, the historical origins of an object does not necessarily define its present connotations.

As a New Yorker article points out, the Gadsden flag wasn’t the first symbol to be  misappropriated and used for racist, bigoted means — the swastika was as well.

Am I saying that the swastika and Gadsden flag are on equal footing in terms of almost universal knowledge of hateful appropriation? No, the controversy surrounding the Gadsden flag is still relatively nebulous.

But that does not change the fact that the flag has been — and continues to be — used by racists and fanatics to represent their disgusting aims. And these modern uses affect any current meaning the flag holds.

The Tea Party, a right-wing political movement said to represent economic concerns — but in actuality was a racist reaction to former President Barack Obama’s election — has repeatedly used the Gadsden flag to represent its political agenda.

Held proudly alongside the Gadsden flag, protestors at Tea Party rallies would hold signs saying phrases such as: ‘‘A Village in Kenya Is Missing Its Idiot: Deport Obama!” ‘‘Congress = Slave Owner; Taxpayer = N**gar’’ and ‘‘Imam Obama Wants to Ban Pork: Don’t Let Him Steal Your Meat,” according to Vox.

A study published in Race and Social Problems found Tea Party supporters were more likely to be racist than your average white American.

Moreover, a Vox article analyzing the legacy of the Tea Party with respect to the 2016 election stated the party’s opposition to Obama is what empowered Southern members to express racist sentiments — no matter how discreet that racism was.

In more recent years, the Gadsden flag has cropped up at President Donald Trump and white supremacist rallies. If the two were on a Venn diagram, it would just be a circle. And in 2014, the U.S. Equal Employment Opportunity Commission stated the display of the Gadsden flag in the workplace could be considered racial harassment.

Recently, paparazzi pictures of actor Chris Pratt wearing a “Don’t Tread on Me” shirt have emerged, further bolstering his long-awaited cancellation. He has been rumoured to be a hard-core conservative, and follows Instagram and Twitter accounts belonging to racist pundit Ben Shapiro, white supremacist Rep. Dan Crenshaw — who liked an image of himself on a Neo- Nazi meme account — and the glorified Trump stan account Turning Point USA.

Why on Earth does our campus have something in common with Chris Pratt? I feel beyond nauseous at this point.

Some people will still say this flag’s revolutionary origin is not racist. But it is important to look at the context — a rally of white people protesting the erosion of good ol’ American values, of the white nuclear family, of the invasion of the United States by immigrants choosing this specific flag to spread their message means something.

These people utilizing one of the earliest symbols of American identity to represent themselves and their racist aims is intentional. They are calling back an old America. That is what the flag means, and that is why it is hateful.

Not only has its meaning been appropriated by racists to advance their agendas, but the flag’s original context in itself represents an America that held Black people in bondage, and committed genocide against Indigenous peoples.

Our school is proudly displaying that flag on Bay State Road, and it’s time we take it down.