With the world crumbling before our eyes, this holiday is a nice reminder for us humans to do our part and be a little more environmentally conscious. I, for one, want my grandchildren to know what polar bears and mild seasonal weather patterns look like, given I never got to see woolly mammoths in real life. Feeling ripped off.

But the notion of pushing individuals to “make a difference” is mildly ironic to me. The evil side of humanity — also known as “Boomers”— is ultimately responsible for bringing the world’s climate to its current concerning state, advancing diesel-engine vehicles and proliferating plastic. And their conception of the palm oil market? Don’t even get me started.

Boomers have simply destroyed planet Earth and there is no going back. Sorry, but it’s true. Earth’s on its way out and it’s their fault, so when Boomers say they want to “reverse” the damage that’s been done, that’s a pipe dream. And hopefully, that pipe won’t ravage the alre

ady melting glaciers of Alaska or the ancestral lands of indigenous people … even though the Boomer track record noted above makes both highly probable.

However, look no further than us young people to start implementing the healthy habits and conscientious decision-making skills needed to quell the downward spiral our world is headed toward.

I acknowledge that we’ve been raised with more awareness around sustainability, and those of us privileged enough to access certain resources have made sustainable living pretty habitual. Though I know some serious idiots who can be pretty wasteful, I think my generation will generally be more kind to the environment than our predecessors.

The issue of food waste is something I was confronted with this past week, when a friend of mine and Mother Earth was presented with a surplus of aging produce she wanted to use in totality. 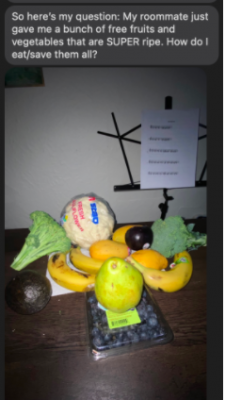 As a lover of fruits and vegetables, I’ve got some helpful tips for you, my friend. And none of this advice requires compositing or preserving — assuming you and your roommate have the appetites to keep up.

First and foremost, I began college as a doublemajor between international and environmental studies. That is an actual fact. I blindly declared this academic track my freshman year, and you can safely bet your net worth that I yeeted out of that mess immediately when I saw the economics and natural science course requirements. I’m loving art history, though.

What wasn’t in the prerequisites of either major was the ability to rescue appropriately ripe bananas, but I’m locked and loaded and have two words for you: banana bread. Should you need a recipe, I dropped one in a blog post. Not to self promo, but do be sure to like and subscribe.

Next in my fridge, I see cauliflower and broccoli — neither of which I’m particularly a fan of. I’m not trying to be gassy out here. However, both of these cruciferous veggies last a fairly long time in the fridge, so don’t feel rushed to use them.

If you’re looking for an easy lunch and dinner that you can spread out over the week, roast both the cauliflower and broccoli on the same pan. Then, in the last few minutes, broil those bad boys for a nice, crispy finish. And don’t forget to recycle that cauliflower’s plastic wrap or make something out of it, like a beautiful — definitely Centers for Disease Control and Prevention approved and breathable — COVID-19 face mask.

Whether you eat the veggies as a side or main course, I recommend dousing them with sesame oil and the spices of your choosing. Sesame seeds are a good textural component and also bring out the flavor of the oil, but red pepper flakes and flaky sea salt are sufficient, too.

Meanwhile, with the remaining avocado, blueberries and papayas, it’s smoothie time. Throw in some other fruits if you’re feeling sassy, then add ice and your favorite yogurt. Or milk. But I hate milk of all kinds. Honestly, I don’t even put yogurt in my smoothies, especially if that creamy avocado is partaking in the adventure. And no hate on Keto diet fans, but f— protein powder and seeds. This is a smoothie.

Not sure about that pear and plum, but they’re probably rotten by now given the time I received that text. So rest in power to them. I hope you can compost them, but if not, that’s your problem. Like I said, I switched majors.

I hope you find these recipes — or whatever they are — helpful. At the absolute minimum, I hope anyone reading this is inspired to “go green” if you haven’t already.

Can we bring that phrase back, by the way? Miss that.