In the Boston cinematic classic “Good Will Hunting,” Minnie Driver’s character Skyler — a British medical student studying at Harvard University, soon to be grad student at Stanford University – summed up the terrifying reality about the high costs of today’s higher education.

President Joe Biden announced this week that he’d be extending America’s moratorium on student loan payments, continuing on his campaign promise to alleviate the financial burden of many college students and recent college grads — whose brains are also nearing six figures of value.

But this postponement amounts to a temporary band-aid on a much larger crisis. The looming student debt apocalypse still remains no matter how many times Biden kicks it further down the road. At a certain point, he’ll have to answer questions as to why he hasn’t taken any substantive legislative action on the issue of student debt forgiveness or cancellation.

Biden’s track record so far on student loan forgiveness is better than his predecessors, having already canceled $415 million in student loan debt. This amount, while a staggering figure by itself, is only the tip of the iceberg when placed next to the $1.8 trillion of total student debt in the United States.

Campaigning on a platform of student loan forgiveness was one of the things that gravitated a lot of millennial and Gen X voters to certain Democratic candidates in the 2020 primaries. Bernie Sanders, an old man by most standard metrics, attracted scores of young people to his campaign given his flashy radical ideas of “people shouldn’t have to enter crippling debt to get an education.”

Sanders made free college and student loan cancellation policies mainstays of Democratic voters’ wishlists. So when Sanders eventually conceded the nomination to Biden and the two campaigns came together to form a moderate/progressive alliance, some form of this policy would have to become part of Biden’s platform.

Barring some “Men In Black” style mass memory wipe that made us all forget that the president did something progressive, Biden hasn’t actually done either of these things. 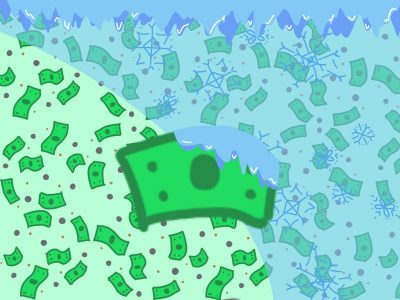 There’s a number of excuses the president could create to explain this inaction. Whether that’s the myriad of “more important” things he’s had to deal with both domestically and abroad or potential petty partisan roadblocks he’s faced in Congress.

Instead of looking for the rest of America to say “poor Joey, I understand you’re very busy” maybe the president should start delivering on the promises of his campaign. Promises that lead to one of the greatest turnouts of young voters on election day, primarily to vote for Joe.

It’s beyond ludicrous that an American college education is so expensive.

On the one hand it’s ridiculous that these hedge funds masquerading as educational institutions — like Boston University — can charge their students 50k a year for tuition, and on the other hand it’s also ridiculous that a government that plans to spend $813 billion a year to blow up people in foreign countries can’t afford to provide an education for its citizens.

You begin to wonder whether or not the six figure bag you drop for a four year education actually leads to the grand enlightenment that you were advertised. Am I paying for a world class education or am I paying for Robert Brown’s two million dollar salary?

Our American mythos hypes up the pull-yourself-up-by-your-bootstraps lifestyle and we expect our government’s policies to reflect that ideal. Our collective national values see government handouts as the ultimate sin. A social safety net, according to those in power politically, is un-American.

What we forget in this is that Americans are getting screwed with their pants on at nearly every turn. The Gucci-ization of higher education — where our colleges and universities are viewed as luxury brands, and priced accordingly — is no exception.

It would be naive to say that Biden delivering on his campaign promises to alleviate the financial burden of college students would solve all of the problems of our severely mangled current higher education system. But continually postponing the eventual doom facing many recent college graduates won’t even make a dent.