Few players in the Patriot League can energize a home crowd quite like Boston University women’s basketball player Riley Childs.

“I love the memories of her getting super hyped on the floor. And just like any ‘and-one’ she stomped, she’s screaming,” head coach Melissa Graves said. 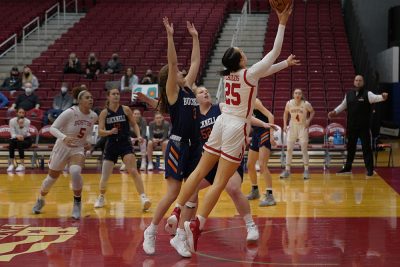 Despite a pandemic-riddled junior season and a serious injury that took her off the court for a considerable amount of time her senior year, Childs said she is grateful for the memories she made as a part of the program over the past four years.

Next season, Childs will play a fifth year at George Mason University after grad-transferring from BU.

During her stellar career at Medway High School, Childs began looking for schools to play at the next level. On her visit to BU, she fell in love with the program and the school.

“A lot of the other schools I was looking at were Patriot League,” Childs reflected. “The big thing that brought me here was when I met like the other girls in the program who were already here I just felt very welcomed and it was like the one school that I visited where I felt truly like a part of the program without even being there yet.”

On the court as a freshman, Childs contributed to a team which was selected to finish at the bottom of the Patriot League standings but succeeded on the court in large part due to her contributions.

Former BU head coach Marisa Moseley rewarded Childs for her contributions by naming her a captain in her sophomore year.

“It’s very rare to be a sophomore captain, so I was very appreciative of it and I really learned a lot,” Childs said. “I don’t know if 100% I was ready for it. But I think that it was the right step for me because it put me in a position to be even more successful junior and senior year.”

That campaign also had an abrupt end, when it was canceled due to the COVID-19 pandemic.

“I’ll never forget when we found out that the season got canceled. We were at our shootaround for our semifinal game in the gym and I thought Coach was joking when she said that it got canceled and I mean, that was definitely a hard moment and I think that whole summer was definitely tough,” Childs reflected.

The following season, BU had no non-conference schedule and played Holy Cross five times in a season shortened by the pandemic. After beating Lafayette College and American University in the Patriot League tournament, the Terriers fell to Lehigh University in the championship game.

Following the season, Mosely headed to the University of Wisconsin and was replaced by Graves, who was immediately impressed with Childs and her approach to the game.

“The biggest thing that stuck out was her personality,” Graves said. “She’s loud. She loves to talk. She’s someone that anyone can get along with. She has that personality that people gravitate toward. So, I thought that was really special.”

“Riley’s one of the best rebounders in the conference. She has a tenacious ability to just go after rebounds, crash the glass super, super hard,” she said.

Childs finished her career at BU with the fifth-most rebounds in program history.

Childs’ final season in Boston would take an unfortunate turn during BU’s Jan. 12 matchup with the United States Military Academy, when Childs suffered a finger injury.

“I put my arm up and it was like a normal basketball play and I just heard a crack and I was like, ‘That’s weird,’” Child recounted. “And I thought my finger had cracked. So I looked down and I grabbed my hand and it cracked again.”

The injury sidelined Childs, giving her a new perspective for the game and her role on the team.

“I realized I need to adjust how I’m a leader,” Childs said. “And it was a really rare opportunity for me because … I want to be a college coach. So that for me was … what it would feel like when I am done playing and just watching from the sidelines.”

After a speedy recovery, Childs would return to the Terrier lineup. She would play an important role down the stretch for BU, scoring ten points in the Patriot League quarterfinal win over Army.

“I’m super thankful that I did end up here and it hasn’t been the easiest career obviously. I’ve had a couple of injuries and a lot of coaching changes, and a lot of new stuff go on,” Childs said. “I’m super thankful for the lessons and the things I’ve learned while being here and playing for the school for four years has been great, and I wouldn’t take back anything.”