Ava Remler, a senior in the College of Engineering, presented an initiative why the University should repeal the current policy that bans pepper spray on campus. 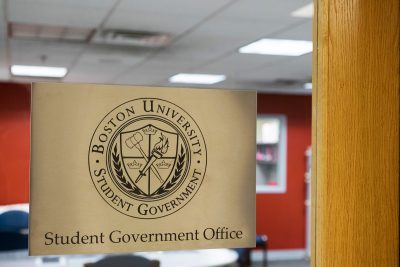 Remler went over BU’s current policy that bans delivery, possession and usage of pepper spray on campus along with other weapons. The current policy states that mace or pepper spray will be removed if they are delivered to the mailroom or dorm and will be confiscated if found in a student’s possession by a resident assistant or BU police.

Regarding this policy, Remler presented four central reasons that counters BU’s ban on pepper spray — Massachusetts state law, comparison to peer institutions, the use of pepper spray among marginalized communities and women and soon-to-be-released poll results reflecting student desires for the ban to be repealed.

According to Massachusetts General Law chapter 140 section 122C, “people over 18 can have pepper spray, mace or other ‘self defense spray’ without an FID (Firearm Identification) card.”

Remler said other universities around Boston such as Harvard University, Wellesley College and Suffolk University, have created their pepper spray policies in accordance with state law by either tacitly or explicitly allowing it.

Remler added pepper spray is important as a protective measure for women and marginalized groups and that having readily available access to it would lower response times.

“If you’re being attacked by someone, you want to be able to respond immediately. You don’t want to have to wait a little bit to grab this thing that you’ve been hiding and then risk getting persecuted by the administration,” Remler said. “This is a very necessary thing.”

However, she mentioned many BU students already carry pepper spray, despite the policy.

“A lot of people I talked to said that despite this policy, they carry it anyways in violation of it because they just don’t feel safe going to frat parties (and) going out at night.”

The meeting continued with a presentation of results from the annual Senate feedback form, designed as a way to gather anonymous feedback about Senate leadership.

Two weeks ago, Senate leadership left the room as senators filled out a survey.

Senators raised concerns about the process and access for joining committees, which the Leadership said they would streamline through a form next semester and start initiatives.

Other concerns were raised about transphobia within the Senate. StuGov leaders responded by encouraging senators to talk to them if they ever felt uncomfortable.

The meeting ended over an hour early.