People are obsessed with Mike White’s “The White Lotus” — a show where you get to see Jennifer Coolidge say the word “chaise” and rich people suffer on vacation. It’s fun to watch rich people suffer, but also in watching their suffering, we find we want to suffer as well. Or at least, suffer in the way that they do.

The show is framed as a “social satire” exposing rich people’s “worst, most privileged impulses.” To be honest, the people in the show are so repressed it’s a miracle they give into a sneeze, let alone an impulse. But that’s the appeal of the show — that these people have been made chronically aimless and plagued by their financial stability, while we get to watch them stumble into a plot. 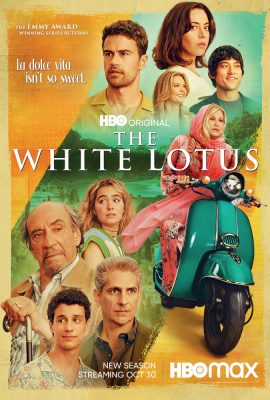 My problem with it is that this season has felt particularly aimless. I feel characters come and go. Storylines are dropped and then picked up again, rather than built upon incrementally. Take, for instance, the character of Lucia.

This season is taking on the issue of toxic masculinity and love. Lucia figures into that theme of love and relationships through her job as a sex worker. She spends the runtime of the show going from one awful man to the next without much of a sense of self.

She is there to be of use to the plot, and to more central, male characters. She is there to show the audience, for instance, this one middle aged guy’s sex addiction, and later, his son Albie’s kink for “pretty wounded birds” (I’ve never cringed harder. This line deserves the death penalty). She is there to show us one handsome rich guy’s predilection for cheating on his wife.

But she herself has no purpose of her own making. Even when the show gives her a motivation or a singular emotion, it is not rooted in a definite sense of self. I mean, in the fourth episode she revealed that she was working to gather enough money to open a clothing store, but so far has never mentioned it again. She begins to have moral qualms about her sex work, but this anxiety comes seemingly out of nowhere, and leaves with little fanfare once she settles on the lukewarm Albie.

In the last episode, her pimp threatened her and followed her all around town while she traveled with Albie. There are questions about whether the pimp is actually harassing her and not in cahoots with Lucia to scam Albie. Even if the threat was real, the whole thing feels entirely in service of the lukewarm rich guy’s development, and not hers. We don’t get to see her scheme or think or worry, and even when we do, it feels flat, unexamined, not as complex as the traumas of the hotel guests.

This is perhaps the great irony of “The White Lotus” — that although it means to deride the problems and dull malaise of rich people, it primarily serves to humanize them. Ultimately,  it is a show in service of rich people’s existence and continuation.

Stories about rich people keep them relevant in our public consciousness and give them subconscious purpose in our minds. We need rich people, because who else is going to think about whether they’d die for beauty while they sit in an Italian palace next to a suspicious man?

What I mean to say is, even if a show claims to be critiquing some kind of system, it is making a value judgment in where it’s pointing the camera in the first place.

In a Vox review of the show’s relationship to indigenous people, Hawaii resident Mitchell Kuga stated that the show used “Hawaiian folk music the way it uses its few Native Hawaiian characters: as hollow plot devices in service of illuminating the inner lives of the series’ mostly white protagonists.”

Moreover, the first season was also filmed in Hawaii during the height of the pandemic, despite indigenous Hawaiians having repeatedly told tourists not to visit due to lack of sufficient infrastructure for the island’s population.

In July of last year, residents in Maui suffered a drought and could be fined $500 for utilizing water to water their lawns. But in hotels and resorts, water usage continued to fly under the radar. COVID-19 hit Hawaii especially hard, and it does not have the necessary medical infrastructure to take care of both its visitors and locals.

In the first season, the show mocked its characters for being clueless about the damage they caused to the indigenous Hawaiian population, but in its own creation perpetuated some of those very injustices. The second season is no different, with the show delving into issues of toxic masculinity without much care to sketch out some of the women caught in its toil.

It’s fun to watch the rich people in “White Lotus” suffer, because when they’re shown suffering they get to be full people. Suffering the way they do feels important, because that’s the kind of stuff that makes good television, or at the very least, makes it to television.

This is all not to say that the show is bad. It’s actually my favorite thing on TV right now. But if it wants to say something more substantial about humanity — and it seems like it does — then it would do good to consider more of its characters as people.